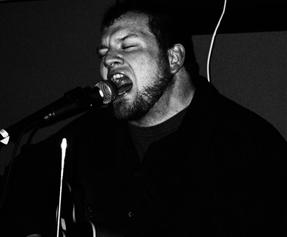 ~~Where does one start to describe this unpretentious outsider artist you’ve likely never heard of? He’s created his own unique blues by the ‘scenic route,’ teaching himself to play after digesting old ‘20s – ‘50s blues cats, prior to discovering Zappa and Beefheart in junior high, and then was influenced by a recording of Indian snake charmer music. His job history provides enlightening life stories and song fodder galore. His moniker came from pro wrestling prior to working as a janitor at a strip club, then making sausages, being an adult video store clerk and then support worker. He spent time as a mixed martial arts cage fighter ‘back before it was cool or popular’ (he knocked out a pro kick boxer in 32 seconds in his first fight and got beat up in front of 6000 people his second). All the while, he wrote lyrics (‘like taking notes beamed into his brain’) on bits of napkin and his own skin, forming the duo Old Busted Bones - who he says ‘were as popular as a flying saucer cult and more elusive than the Lock Ness monster’ - in 2008 as a creative outlet. His one-man guitar and percussion format eliminates band squabbling and is the happy result of 20 years of penning songs, many in a tiny cabin in the woods.                                           "Courtesy of the Calgary Folk Festival"